In a recent post (not that recent, actually, because I’ve been busy, as you will see) I waxed lyrical about the joys of printing and pressing.

I have since done some typesetting and hand printing of short extracts from my own writing at the small, calm, inspiring workshop of the Juniper Press in Liverpool. 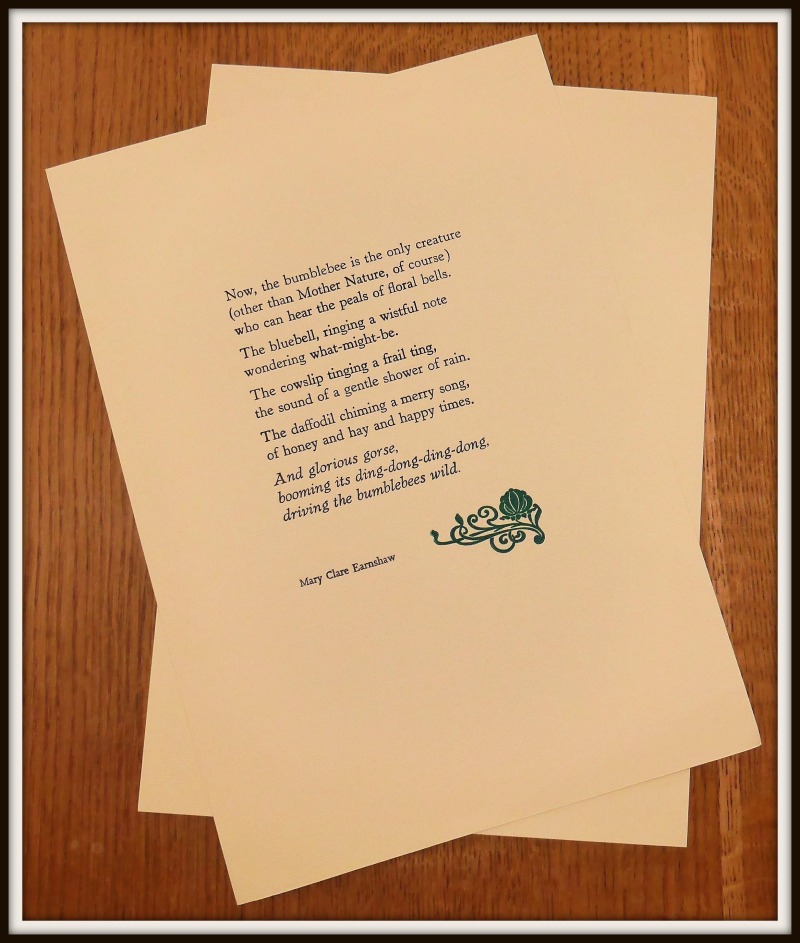 The Press is run by Ken Burnley, whose lifelong love of printing was inspired by a physics teacher at his old school.

Ken busy on the left, Sandra, my co-student (!) on the right

Apprenticed to the trade as a youth, he not only has a wealth of experience and knowledge at this fingertips – and the ability to visualise text that few have today – but also a writer’s appreciation for words, their rhythm and meanings.

The press occupies a surprisingly small space on the third floor of the Grade I listed old Bluecoat school in Liverpool. Nearly 300 years old, the beautiful Queen Anne building is now an arts centre, with a good cafe and bar and a tranquil garden –  a respite from hyperactive down-town Liverpool.

The room in which the press resides rejoices in a light airy atmosphere behind its oval windows. Hand presses and trays of type line the walls and a large table occupies the centre space.

The walls are hung with examples of typefaces, but also the work of the many creative people who have come for a day or more, to learn the rudiments of typesetting and printing.

Sandra’s work hanging up to dry

Those, like me, who are impatient to get on, may chafe a bit at the slow pace, but soon learn that steady and slow is the way to go. ‘That’s upside down,’ was the comment my first attempt at setting inspired.

I’ve been back three times now and have three bits of work to show for it (the one up above is from the spring story in my Seasonal Tales of a Magical Nature series) – though, to be honest, the last was finished and printed (and two upside down characters turned upright!) by Ken.

Time ran short, the day I did the setting, as we were diverted by printing some old blocks I took in from a comic Southport publication from the late 19th century. I can see this could become an obsession… 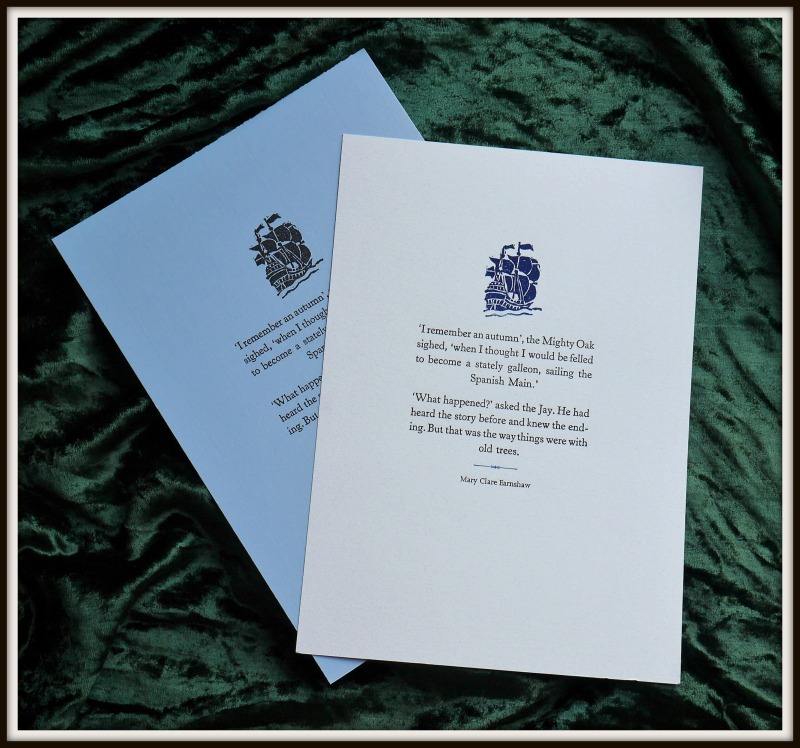 [Top is summer,  autumn below – winter yet to be set and printed]

But the big news of the year has been the setting and printing, with Rufford Printing Company, as described in the previous post – and, now, availability for sale of my short story, A Little Match Girl 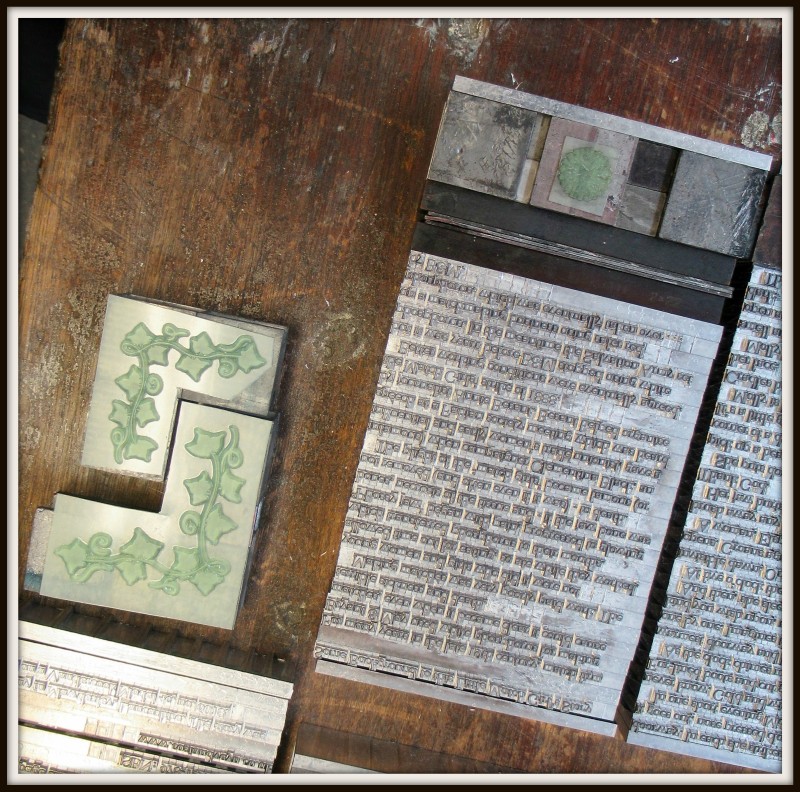 From this, early days of type and polymer blocks, to …

Amazing to see how this original snowflake illustration by Joanne Wilks: 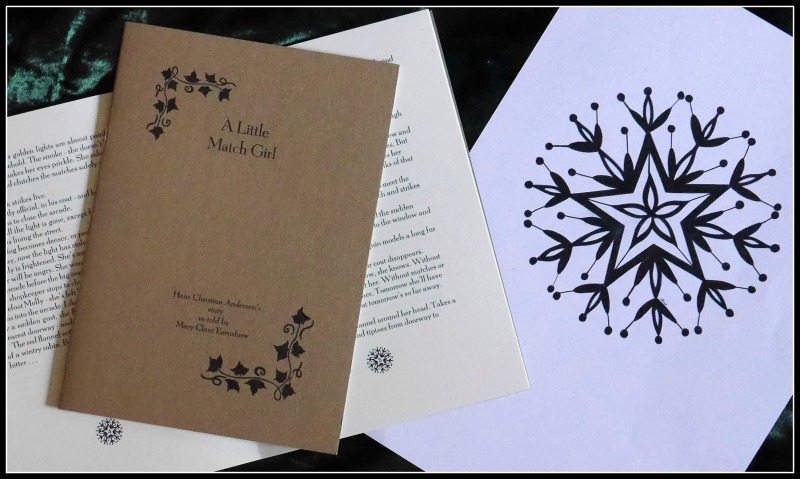 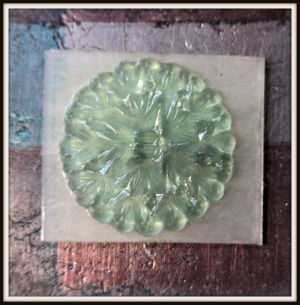 A Hans Christian Andersen tale re-told (by me),  it’s a perfect stocking-filler or card substitute for Christmas, set as it is in wintry Victorian England.

Much more than a card, but only twice (or less) than the price of those for sale in the high street, if you order online it’s sent out by first class post or air mail to anywhere in the world that has a postal address, with a handy label for re-use of the cardboard envelope.

If you happen to be anywhere near Manchester it’s available from the People’s History Museum; in Liverpool from News From Nowhere; or Southport from Broadhursts Books.

But you may simply buy it from my website by clicking the link below:

And hurry! Christmas is coming, it’s a limited print run, nearly half already sold – and when they’re gone, they’re gone.

Thank you, in advance, for supporting a wonderful craft industry (and me).

2 thoughts on “‘A Little Match Girl’”

The sensory pleasures of printing and pressing

A mill, a hill, a graveyard. Stepping out with a Maid in England