I was pondering that question last Saturday as I milled around with youngsters, oldsters and in-betweenies enjoying some welcome spring sunshine – and the latest open day at Rufford Printing Company in Mawdesley, Lancashire. 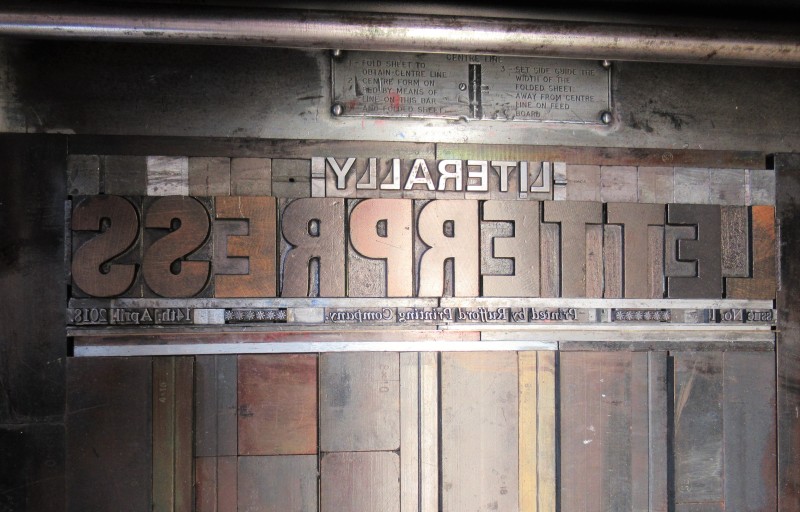 A newsletter in the making

My thoughts returned to the question as I lay awake in the early hours of Sunday morning, conscious too early for my liking.

The liquid trill of the blackbird had already surrendered to the wood pigeons’ cooing. The pallor of dawn framed the still-dark curtains.

I wasn’t anxious, ill, or alarmed, just thinking, when a memory struck out for the surface in my restless, churning brain.

The metal band that held the hairs of my wooden paintbrush in place, tapping the rim of a jam-jar of water, cloudy with muted colour.

I was sitting at a table covered in newspaper. Wiping water off the brush on the edge of the jar. Feeling the smooth hairs combine as I sucked it to a point.

Smelling my Reeves paints, two rows of discs in a tin box, the lid a palette for mixing.

In front of me was a Winsor & Newton painting book, filled with outlines of people in period costumes. Precision colouring-in, for a little girl.

And I wondered as I remembered, are these the reasons I feel so drawn to printing?

Perhaps not the taste (though as a child I tore tiny bits from my books and ate them, an early appetite for words manifesting itself – dare I say it – literally), but its sound, smell and feel?

The rhythmic chatter and thump of the presses.

The clattering keys of the Intertype line-caster.

The tinkling cascade of matrices, rushing to find hot metal.

Our friend, Helen, repeating, “I love the smell of the ink!”

Which is what, this morning, evoked the smell of my Reeves paints and the taste of the brush in my mouth. The downy texture of sugar paper. The sight of bright powdery poster-paints for mixing in pots at school.

The application of colour by brush. Lines drawn, or outlines filled-in. Pencils, crayons, charcoal, pens. Creating images, or words, on paper. Making communicable what was only in my head to other people’s heads – without the spoken word.

What a wonderful thing it is, printing.

Language, thoughts, imaginings, images – none of these could be portably communicated in any far-reaching way before the invention of the printing press.

Yes, there were scribes in ancient Egypt. Rock art is found around the world. Ancient humans painted pebbles and carved figurines.

But even as medieval monks fashioned quills and made ink to write, as they illuminated, sewed and bound their work into books, words did not spread far and wide. No, they became exclusive.

And a press with added electricity, even a small one, could soon print 5000 pages an hour.

And now. Print of the pressing kind becomes an art form. A heritage skill.

Is the medium (still) the message? I never really understood Marshall McLuhan’s famous statement, I’ll be honest. But where Twitter is the medium, I for one am finding the message stressful.

And so, back to printing.

Its allure is growing. Not just for me, but for many. And not only oldies, harking back to days they felt they understood, but the very young – like Helen’s granddaughter Margot – and every age in between.

There I sat on Sunday morning. A box of hand-printed keepsakes beside me on my desk.

The words of Barack Obama, pressed onto paper. Communicating with anyone who can read, or be read to, his sage advice to his daughters:

To be touched, felt, seen – yes, even smelt. But probably not tasted.  No, not even by me.

Right, now for the hard work of telling you about the processes I’ve been watching, done here by images and captions – enjoy!

First, the man behind it all.

Brian Smith’s introduction to print was therapeutic, after he was paralysed at the age of 16 in an accident. His first machine was a hand press on his mother’s dining table, now he runs Rufford Printing Company, where modern commercial print rubs shoulders with his print-passion –  letterpress.

The Intertype line casting machine in front of him here, made in Slough in 1976, was the last of its kind ever produced. It sets lines of type using hot metal. It was in use with the Guardian newspaper in London until May 1987. It’s not the greatest image of the machine itself but the only one I had of Brian with it –  you can see it properly in the videos below. 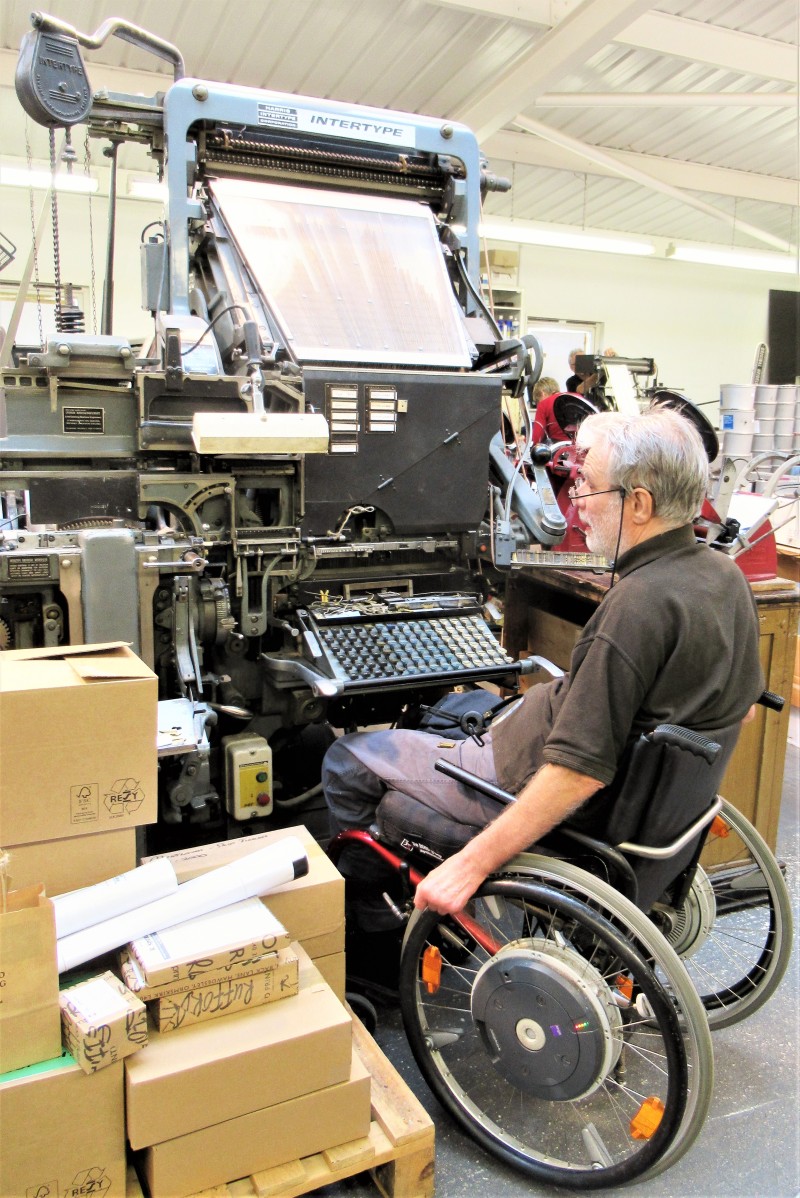 It’s not a qwerty keyboard, the keys on the left, operated with the left hand, are the most commonly used. There’s no shift key, there are 90 keys and uppercase letters have their own. The first two columns ‘spell’ ‘etaoin shrdlu’ which sometimes found its way into print if a proofreader missed it, because if the operator made a mistake he (usually he) would run his fingers down these rows filling the line with the nonsense words in what is known as a ‘run down’. It was often quicker to cast a bad slug – line of type – than to hand-correct the line in the assembler. The slug with the run down is removed once it has been cast, or by the proofreader. The keys are connected by vertical push-rods to escapements which, when a key is pressed, release matrices from the magazine. Those are slugs up there on the right.

The magazine of the matrices that are used to cast the letters top left looking like a New York skyline thanks to the lighting, the inside of the bit where it cascades down when keys are pressed top right – I thought it rather beautiful, the mould disc where the hot metal meets the matrices to create a slug – a line of type, finally the full keyboard (if you want more detail of the process just search online).

In the videos below, David Evans is setting  part of my ‘A Little Match Girl’ story, a re-telling of Hans Christian Andersen’s original. You can see the brass matrices – which mould the letters in hot metal – as they cascade down when David presses the keys. They are then returned, after the casting is complete, at the very top and you can see them tinkling back in. The system was designed by a watchmaker and is, as you would expect, very precise. 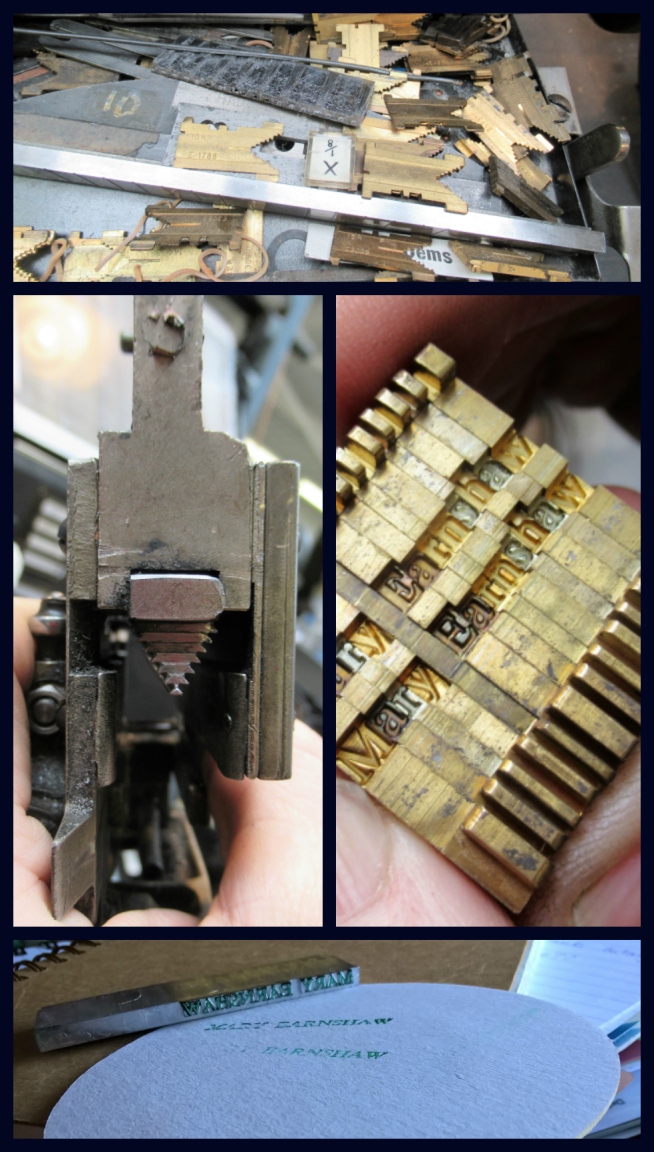 The brass matrices – the v-indented things in the tray at the top, are the moulds for the hot metal that will form the slugs. Two sets of matrices spelling my name are held by David but the slug on the beermat was not produced from them – clue: it’s all in upper case!

My Little Match Girl story is being set in the Egmont font and will be printed on a Heidelberg Press (see below for video). This is an early sample using the first paragraph. 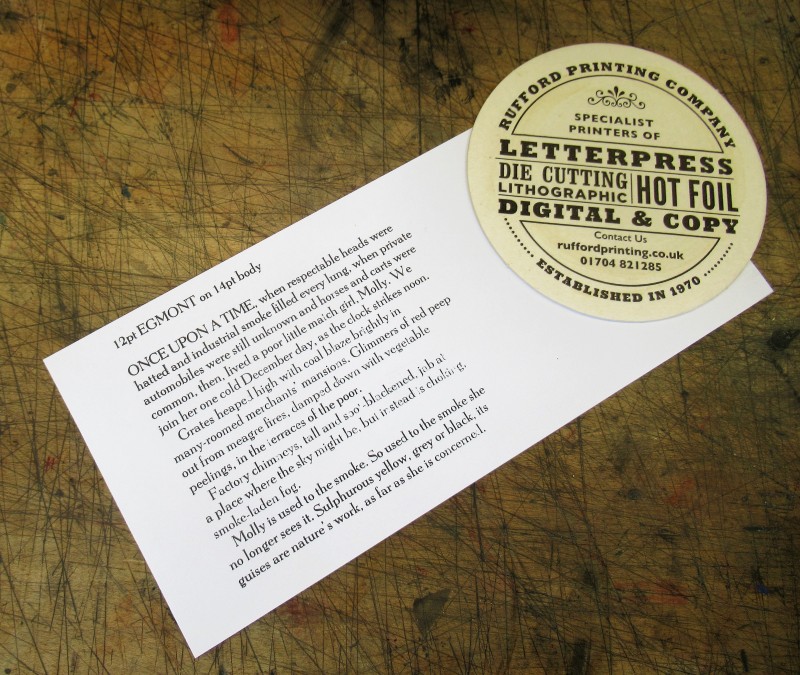 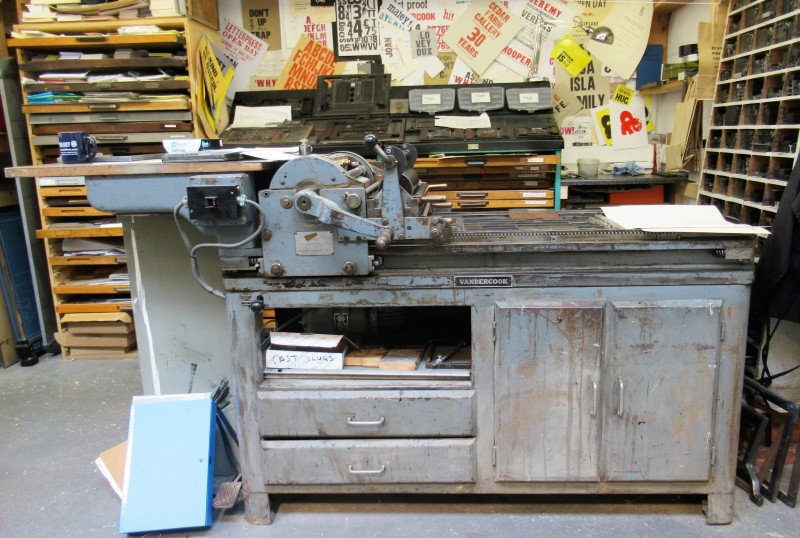 The Match Girl will be proofed on this Vandercook proofing press, operated by hand with that rotary handle on the left – not looking its best thanks to my clutter – sorry, but it’s realistic!

An early draft of the Rufford newsletter on the Vandercook

In the video below a Heidelberg T Platen 10×15, built in 1951 and still going strong, is operating slowly enough to follow the process – but it can print 5000 per hour.

Foil printing uses a magnesium plate as seen here and above 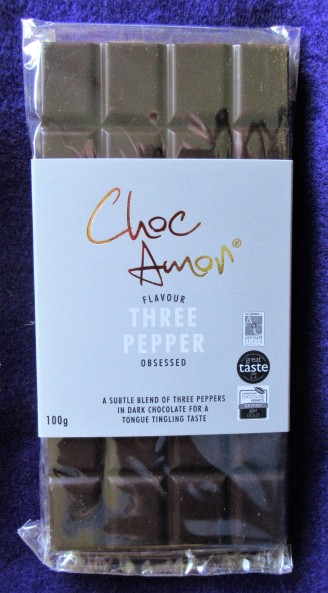 There you are. Print ancient beside the modern.

And nice people: Brian and Joan Smith, David Evans from Todmorden who’s setting my story, Dave Hilton on the hot foiler, Ken Burnley from the Juniper Press at Liverpool’s Bluecoat centre who toiled over the Vandercook, Tom Dunn who came all the way from Exeter to relive times past on the Intertype – and Ross Krige, arguably the Printer’s Devil.*  😉

*(see my post on Incline Press for the explanation)

I recommend it for a grand day out. Look out for the next open day here:

19 thoughts on “The sensory pleasures of printing and pressing”