What does it mean, now?

There’s been much fretting over recent years about that question. Scottish, Irish, Welsh – each nationality has its own identity. Whether you see a caricature, a historic hangover, a modern revival, it’s there – but English?

I suspect it’s partly the penalty for years of ‘English’ being synonymous with British when the kingdom still ruled the waves. We subsumed the others and lost ourselves in the process.

Or was it the two world wars that eroded our traditions and ideas of self?

A combination of both with loss of empire?

As 15 year-olds at school, studying English literature for public exams, we were dismayed to be allocated English and Scottish ballads where others did Wordsworth or other such lyrical rhyming bards.

But – rather like Latin – I see the worth of the dour verses more, the older I become.

They encapsulate history. Paint pictures of human nature. Tell us stories and, if we listen, teach us lessons.

‘My Bonnie Lies Over the Ocean,’ took us to Scotland, in Wales we mourned ‘David of the White Rock’ and his harp. Our convent school’s Irish nuns turned a blind eye to Republican songs at our folk club and officially taught us Yeats’s  lovely, ‘Down by the Salley Gardens.’

But we also sang English songs and shanties: ‘The North Country Maid,’  ‘Early One Morning,’ ‘Green Grow the Rushes, O’ and many more tales with morals, put to music.

Including, of course, ‘On Ilkla Moor Baht At’ (On Ilkley Moor Without [your] Hat). A Yorkshire song.

Famed for its textile industry, its dominance once world-wide and emphatic. But among its proliferation of woollen mills, sprinkled, here and there, from the eighteenth to the twentieth centuries, was cotton.

It was from a former cotton mill that I set out one December morning in the footsteps of another – arguably even more famous Yorkshire export – Emily Brontë.

Emily was born two hundred years ago but still her masterpiece (mistresspiece?) entices people to Haworth and its encircling moors.

‘Wuthering Heights,’ Catherine Earnshaw, Heathcliff – names to raise a shiver on a wintry night when the lights go out, the window rattles and the wind howls.

The weather had been right Yorkshire two days earlier, rain falling on frozen ground slicking the world with treacherous ice. But Monday dawned above freezing, still chilly, but fair.

I’d booked a set of headphones, a walk, an experience, for ten o’clock.

It began in a graveyard, with a cacophony of cawing corvids in the headphones. Weak sunlight glistened on dewdrops dangling from the branches of leafless trees, their sinister dark limbs, stretched against a pale morning sky.

The graveyard in front of the Parsonage in Haworth

Then came the moving voices of that magical folk group, The Unthanks. English north-easterners themselves, they had recorded some of Emily’s poems. Not only that, they had recorded them to the accompaniment of the piano which still stands in the parlour of the Parsonage where the Brontë family lived.

Adrian McNally, part of the group, had set them to music. But first he had to accustom himself to the ways of the old piano. 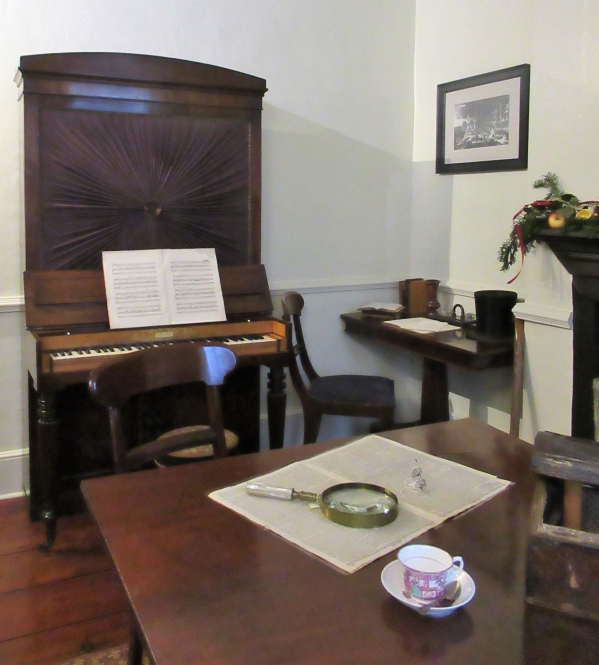 The Brontë family piano in the Parsonage, Haworth

As I learned from the commentary between poems, it had its own preferences. The piano sang best in its higher notes and, said Adrian, felt almost like a cross between piano and celeste.

Impatient for more sung poesie, I began to tire of his talking, but when the music returned I understood why he’d gone to such lengths.

My heart soared with the chiming high notes that flew me away from his words.

I stood in awe and wonder. On a hill, rising skywards out of Haworth, where Emily and her sisters often walked.

Accompanying the headphones, borrowed from the Parsonage Museum, was a leaflet describing a circular walk, numbers on a map telling me which song to listen to – but it was barely needed.

It’s fair to say – as the Unthanks do between recordings – Emily may not have been happy for all her poems, including some of these, to be published after her untimely death as if they were proud, finished specimens.

But woven into the mournful, beautiful, soulful melodies of the Unthanks, I could not help but soaking up, dissolving in Emilyness. In death and decay, but also in a strange kind of acceptance, of love. Of hopeless hopefulness, if there can be such a state of being. (Perhaps that’s Christianity?)

Once home for Emily, the since-extended Parsonage, above, the school to the right, seen from her final resting place, the graveyard

One more thing about this moving, inspiring experience.

As I stood atop Penistone Hill, watching dramatic banks of cloud skirt the lofty moors – those heights that withered – draping them with rapidly changing moods, I knew I was the first, other than those who had devised, recorded, created it, to do this walk.

And I felt like a bird flying over the world, seeing everything anew.

I’m proud – yes, proud – to have lived, for two happy years, on the outskirts of nearby Thornton, where she was born.

Proud to be surnamed Earnshaw.

Proud to have walked with the Unthanks and Emily. Immersed in their English creativity. But I can also set aside that pride. Don’t nationhood and pride so often end with antagonism?

She – they – speak and sing in that universal language, art. Of joy, sorrow, pain, pleasure, hope – and despair.

And I know that, at least in my head, those words, twined with music, linger on the winds roaring, whispering, crying over the Haworth moors.

This video promoting the recording of Emily Brontë’s poems by the Unthanks gives you a flavour of the fragile beauty they have created together.

13 thoughts on “A mill, a hill, a graveyard. Stepping out with a Maid in England”

Fairies on the wing, summer on the wane