Whenever major industrial enterprises are threatened with closure – like the British steel industry, as I write – we all wring our hands. Well, those of us who care about the fate of ‘deselected’ workers do.

There’s not much else we can do. There are only so many online petitions you can sign. And the media don’t cover demonstrations any more.

But there are some lost industries no-one would want to resurrect. Like 19th century lead mining. And that was what we had in store, Good Friday just gone. Killhope – what an appropriate name – lead mine.

I’m always perplexed about Good Friday. Why ‘Good’? It’s the grimmest day in the year if you’re brought up in the Christian tradition. Unless you count Holy Saturday, when God effectively vanishes from the Earth. For a day.

On top of any religious gloom, there’s the weather. How often does spring pour forth its early bounty only to withdraw it, blasting us with wind, rain – even snow – over the Easter long weekend? Often enough, I’d say.

The day started well, therefore: sunny, all horizons blue where the day before they’d been barely visible in the murk.

But there was something in the air. It didn’t feel like a ‘flowers that bloom in the spring, tra-la’, kind of day.

Our first goal was Cherryburn, a place we’d visited once and liked. It’s the only extant home of Thomas Bewick, master engraver and artist.

On our last visit we had the luxury of a quiet day. We spent time scrutinising the tiny illustrations, the metal and wood plates, the tools of the artist. We smiled at the braying donkey, wondered at the view. Inspected the wicker bee hives, drank a cup of tea. 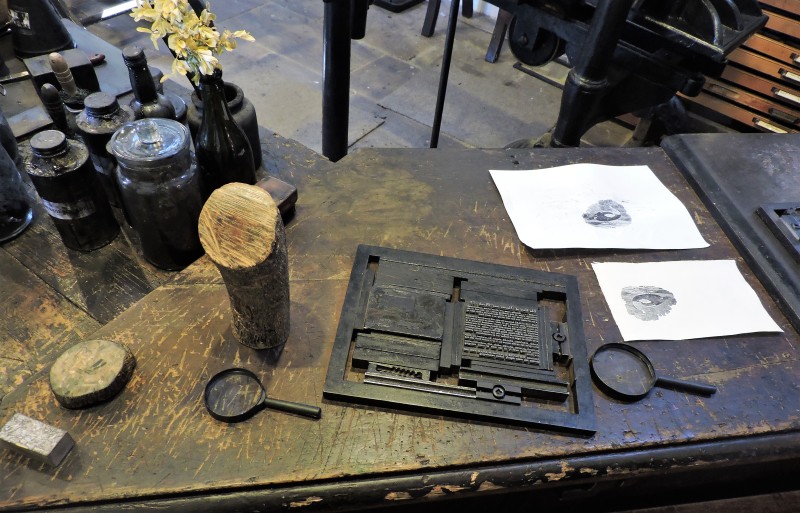 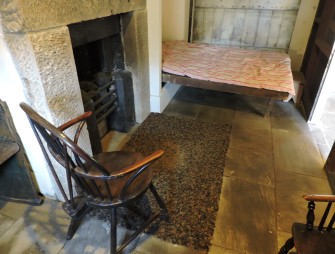 Bewick’s tiny bedroom, so small it was hard to photograph

This time, despite arriving the minute it opened, we were far from alone.

Hordes of children and harassed parents rampaged through the grounds looking for Easter eggs. On Good Friday. At a National Trust property that’s small, has limited parking and whose raison d’être is that a master craftsman – nay, artist – lived in a tiny hovel, there, for a while. 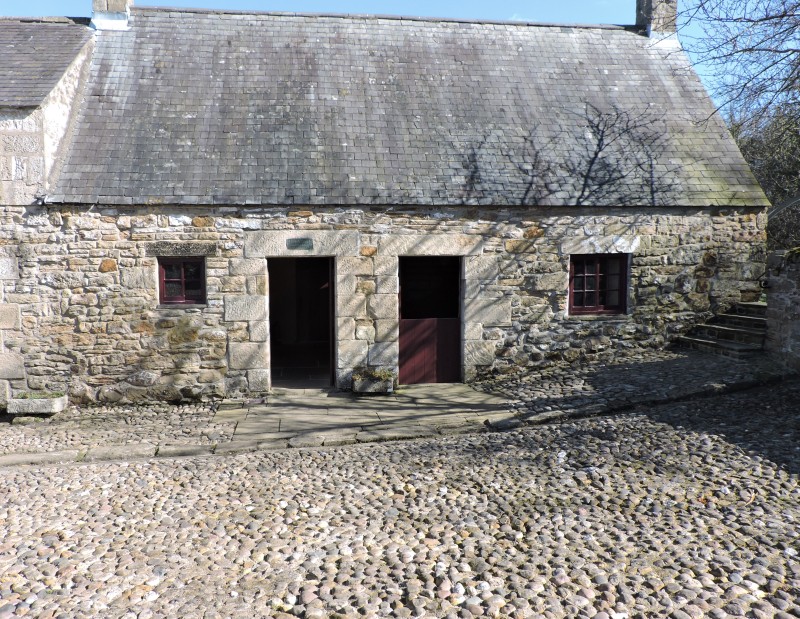 Bewick’s house is entered through the door on the left

Jane Eyre, who at the beginning of her story sat cross-legged ‘like a Turk’ behind curtains, reading Bewick’s History of British Birds, would have fled in terror.

Disgruntled, we extricated ourselves from the inadequate car park and went in search of another home, that of George Stephenson, inventor of the Rocket, the little engine that did.

Did win the challenge to design a steam train. A steam train that ran on the first public railway line in the world, from Liverpool to Manchester, in 1830. That’s what.

Our satnav advised a detour – a bridge was closed. When at last it declared ‘you have arrived at your destination’, we overshot, not realising we had to park half a mile away from our goal. In another inadequate car park.

We squeezed into a space and left, a tad anxious that some thoughtless types might block up our exit routes.

The footpath ran along a waggonway, by the River Tyne and the site of a former – irony of ironies – railway line.

The Stephenson home was not a house.

It was one room. For a family with five children.

The Stephenson family, 7 of them, lived in the downstairs room on the left

Sleeps 7 .. and yes that is a pullout bed underneath

Humbled, we took our leave, forgoing tea and cake, worried about the car. Sure enough, one exit was blocked. We squeezed out before the other became impassable.

By this stage I was feeling grumbly. And somewhat misanthropic.

We stopped, briefly, at the church where Thomas Bewick was buried, before our satnav intervened, again. An accident had blocked our route, we had no choice but back lanes.

It’s surprising how long it can take to travel twenty odd miles across moors on back lanes.

By the time we drove through the ford that led to Killhope’s (roomy) car park, we were weary of driving. Weary of quaint roads. Weary of dramatic scenery.

The mood of the day wasn’t improving. Nor was the weather.

Did we want to go down into the lead mines? We’d have to be kitted out in wellies and hard hats. We left our options open. There wasn’t exactly a crowd.

Dutifully, we toured the small exhibition and were stunned to discover an art form we’d never seen or heard of before – Spar boxes. Glorious confections of crystals.  A way of finding light in darkness, hope amidst despair?

It was impossible to get a good picture – these are postcards – the one on the left shows a Spar ‘box’ exterior – they were things of intricate beauty many of them. The one on the right shows an interior composed of minerals mined below ground and put together to create miniature worlds that could be lit with candles creating magical effects

But there was no more putting off the grim outdoors. A cutting wind harried us on to our first stop. Downstairs, a smithy and stables.

Above, a miserable sight.

Bunk beds where grown men had slept top to toe. 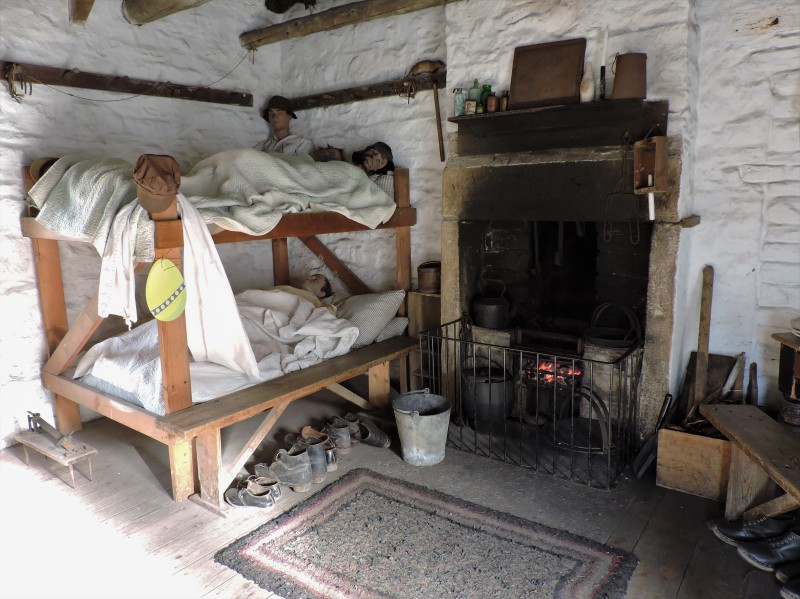 Hats impregnated with clay hanging on the bed posts – miners attached candles to them to light their way in the mines. 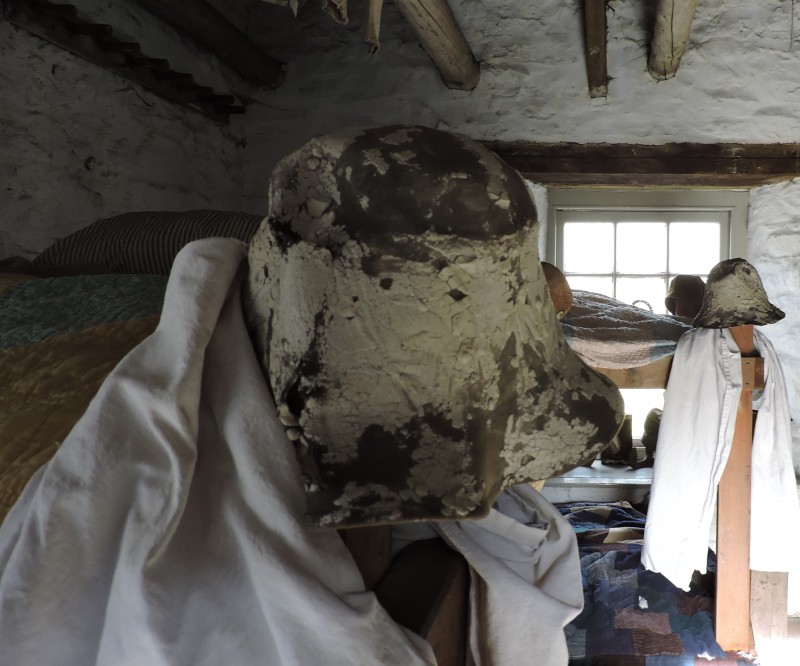 Wooden clogs in a neat line.

A small fire made little difference to the bitter chill.

I imagined the retching coughs of the ones who had TB but were still able to work. Passing it on to their bedfellows. I suppose the chill might’ve killed any bed bugs. Or fleas.

A person can have too much imagination.

Outside again, a gate barred the entrance to the mine. To a dank, dark hell on earth. An experience too far, for us.

In the exposed patch of ground outside, young boys would have washed the dregs of finds, salvaging every last teeny, sparkly, speck of lead. 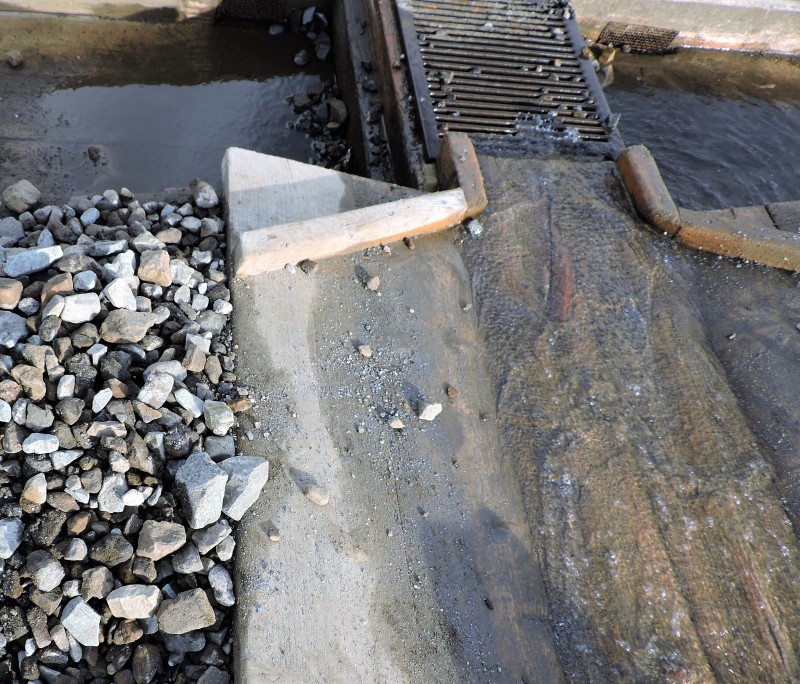 The picture above is a close up on this

I pulled my woollen coat tighter around my shivering, well-fed body.

Thought of the skinny ragamuffins who slaved here, day in, day out, in wind and rain, sleet and snow. Arms in cold water, making profits for their owners. And earning a crust.

The view, ostensibly beautiful, seemed a mockery – a veneer for the harsh and cruel world I was reliving in my mind.

We made our way to the great wheel.

It was dramatic and impressive, but the abject working conditions had coloured everything dour for me. 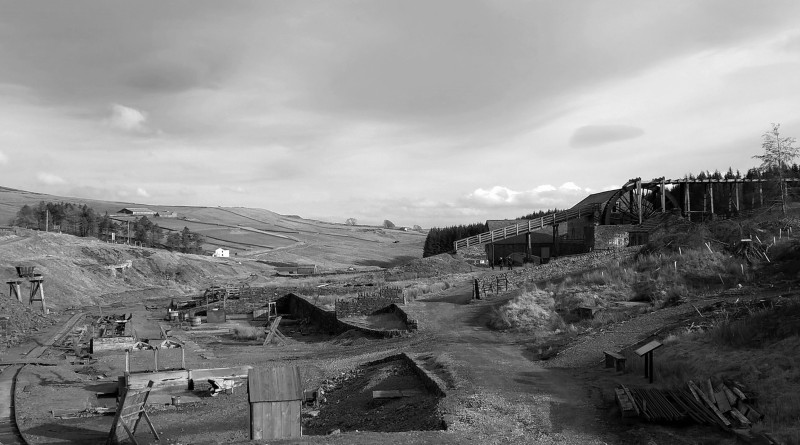 We spent a few minutes in the jigger house seeing more wheels turning. But engines, machines, things that usually make me feel inspired by the fruits of human ingenuity, here did not.

We returned to the museum entrance.

It was the first day of the year’s openings. The winter weather is too hostile for pampered 21st century folk to venture out to such sites. Even the day before, they’d had to pressure wash the mud away so visitors could get in.

As we drove away, I thanked my lucky stars that, for all its problems, we live in the world we do. That I was born where I was.

There’s still so much to do. I’ve spent much time in Africa over the last 30 years and know only too well that Victorian working conditions – and worse – are far from being a thing of the past.

We lament the passing of our industries, like coal, and steel, but would we want the labouring back?

Perhaps the robots running the world in fifty years’ time will marvel at our capacity to endure.

Or perhaps they’ll laugh. Depends, I suppose on their programming.

Time, as they say, will tell.

6 thoughts on “Abandon hope. Sometimes it’s for the best”

Warp and Peace. A journey from weft to rights